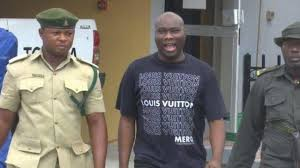 Read Also: How To Always Look Elegant And Classy

On Monday, Ismailia Mustapha, who is better known as Mompha was arrested and he is currently standing trial alongside his company, Ismalob Global Investment Limited, on an amended 22-count charge bordering on cyber fraud and money laundering to the tune of N32.9 billion brought against him by the EFCC.

It would be recalled that on 18th October, 2019, Mompa had been arrested by the Nigeria Immigration Service at the Nnamdi Azikiwe International Airport while boarding an Emirates Airline flight to Dubai, following a watchlist by the EFCC.

Mo Abudu Officially Denies Having An Affair With Rotimi Amaechi