According to the latest updates following the death of Sylvester Omoroni Junior, a 12-year-old student of Dowen College who was beaten by students trying to lure him into a cult, the school has shut its doors.

In a statement to parents, the school has announced its decision to shut down activities in the school following the news of Sylvester’s death.

In a tweet that quickly went viral, a Twitter user named Perri, who claimed to be a cousin of the late student, broke the news that his little cousin was beaten because he refused to join a cult group.

He also posted a touching video of Sylvester Oromoni Junior – who was obviously in pain before he died. The school which had informed the parents that their son had sustained the injuries during a football match has come under backlash from a cross section of Nigerians, including celebrities.

Steve Chuks, Tacha, and Caroline Danjuma were among the first set of celebrities to react to the news and share updates on their social media handles. They have also called on the authorities and Nigerian police force to immediately swing into action and ensure that the culprits are brought to book.

Following the sad news of the death of the 12-year-old Sylvester Oromoni Junior, the school – Dowen College has promptly sent a message to parents and staff, announcing that the authorities school have taken an emergency decision to shut down the school for the next two days.

According to the message sent to the parents, the authorities said they have decided to shut down the educational facility for the coming days following the emotions of the students because of the incident.

See the message from the school below, and share your thoughts in the comments session below. Our hearts and thoughts are with the family of the deceased, and we call on authorities to look into the matter swiftly. 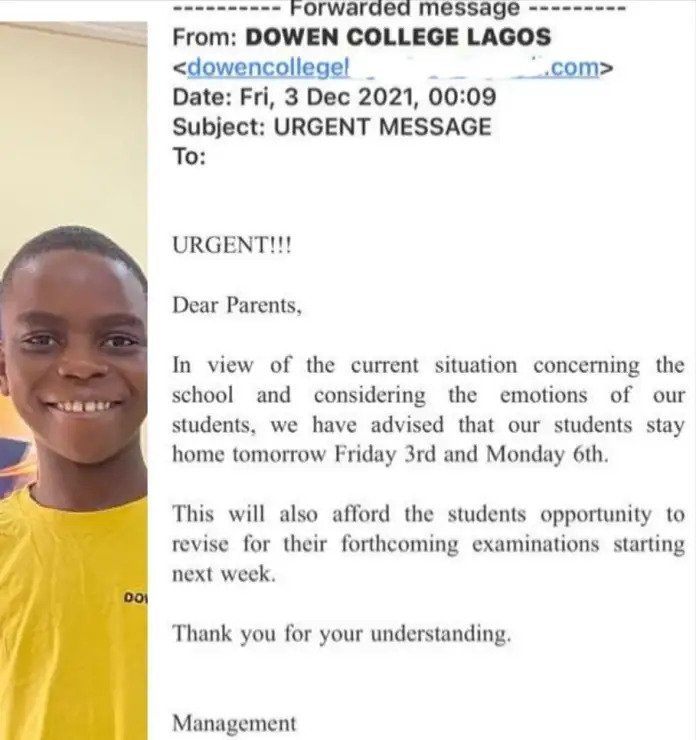 Glam Look Of The Day: Toke Makinwa Slays Like A Boss In Classy Red Suit

Truth Behind It All: Rema's And Dj Neptune Reconciliation(See Details)