Popular Nigerian comedian, Chinedu Ani Emmanuel, better known as Nedu Wazobia has been called out by an unknown Islamic group and accused of blasphemy.

According to Akabe Ibrahim Usman, “Chinedu is sabotaging every effort of Islamic teaching and its values while, his randy attitudes of womanising in his comic films are not only parallel to the dignity of a Muslim Hausa man he is representing but subjugating the good conducts of Islamic virtues.”

See the full call out below;

TO MY MUSLIM BROTHERS/SISTERS

The way some comedian actors use religious imitations and names to crack laughter, is a slander upon Islamic rites.

Religion is a said to be sacred doctrine that requires special respect from all humanity. God created all of us to worship Him and He said “Do you think we created you to play that makes you doubt of coming back to us?” Qur’an, Al-Muminuun, 115.

While, “the case is the same with other religions because there is no religion that entertains mockery on itself”. Muhammad B Muhammad FB post.

“In Islam, it is said when people become loose to their religion, the people will become wayward and lost the Lord’s glory”. Auwal Ahmed Ibrahim Goronyo 2019.

Moreso, The law of Nigeria forbids the use of discreet words on the religions of people by any means or use any display that disputes the ethics of any religion.

Its worrisome to note one Chinedu Ani Emmanuel an Igbo Christian who is popular known as Sister Nnkechi and Alhaji Musa can never do justice to Islamic religion and the culture of Hausa people he is imitating to make living. His plays are full of flaws to the condition of Hausa cultural norms and values.

Truly, Chinedu is sabotaging every effort of Islamic teaching and its values while, his randy attitudes of womanising in his comic films are not only parallel to the dignity of a Muslim Hausa man he is representing but subjugating the good conducts of Islamic virtues. Even the Muslim comedians participate in this deregulatory act.

I look at this unlawful jest as catastrophic incidence which will never yields an ideal divine endowment to our existence as humans of knowledge and religion.

Therefore, Muslim should rise to protect their religion before they fades away and become puppets in the hands of the coming generation by constituting committees among them to halt this doom that is befalling our existence, surely the act is evoking the wrath of the God upon people.

They should let their people know how those dehumanizing attitudes are putting the country at stake of jeopardy.

Finally, The authority of Muslim Ummah should stand to this and enact laws that will look at the display and write-ups of comedians to reduce our burdens of atroties to the entire nation. 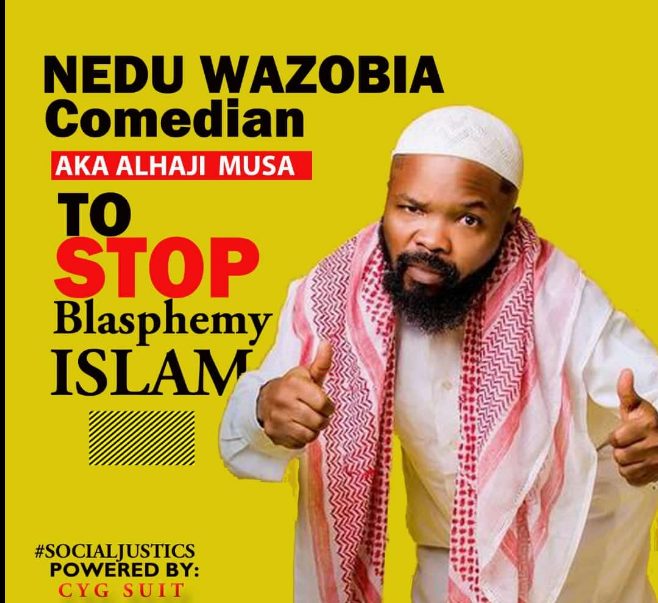 7 Nigerian Celebrities Who Celebrated Valentine With Their Partner (Photos)

“Talk to God about your problems, not your friends” – Comedian Nedu Wazobia dishes advice

Celebrity Marriage: Our first child is not my son – OAP Nedu Wazobia cries