Musician Charles Oputa popularly known as Charly Boy has revealed why he is usually naked in his music videos and social media posts.

The controversial entertainer shared a throwback picture of his father former Supreme Court Justice Chukwudifu Oputa on Instagram on Tuesday, wearing only a pair of underpants.

“My People, this is a picture of my late father. Taken in 1900000. When he was in Achimota Ghana as a cadet officer. Una see say keeping fit dey our blood from time. Una also see say, our body too dey smooth like silk dats why we too dey naked😂 Are u getting it?” 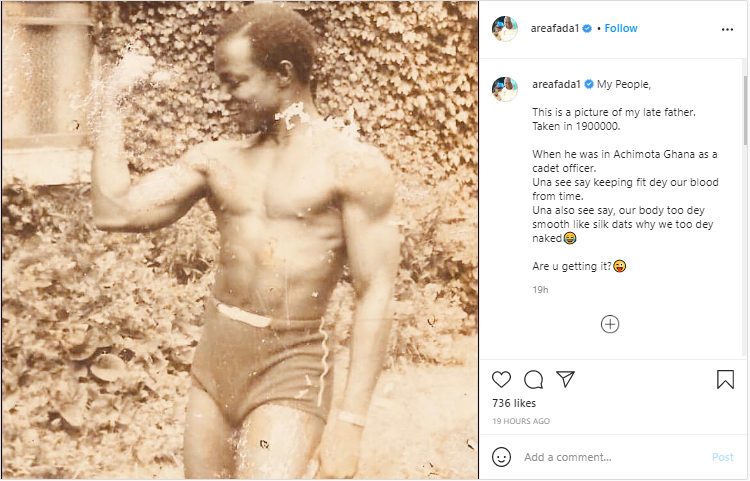 The septuagenarian started his music career in the ‘80s and is also known for his stand against bad governance.

Meanwhile, Nigeria Afrobeats stars Burna Boy and Wizkid have both won awards at the 2021 Grammys.

Beyoncé’s daughter Blue Ivy was also a winner on the song.

The Best Music Video award is given to the artist, video director and video producer.

Burna Boy, real name Damini Ogulu, a nominee for a second consecutive year, won with his Twice As Tall album.

The 63rd Grammy Awards is being held in Los Angeles. Traditionally billed as “music’s biggest night”, this year’s ceremony is different because of the coronavirus pandemic.

There is no audience, and performers have been separated onto five stages, arranged in a circle inside the Los Angeles Convention Center to maintain social distancing.

Burna Boy, 29, beat four others including the Malian band, Tinariwen.

VIDEO: Did Charly Boy Get a Botox Treatment?