Rene-Jean Page, Bridgerton star actor, who stars as Duke of Hastings is breaking off from the popular Netflix romance series.

A post from the show’s social media account confirms the 31-year-old actor will not be returning for Season 2, which is currently filming in the United Kingdom.

Written in the voice of Lady Whistledown, the show’s anonymous gossip character played by Julie Andrews, the announcement says,

“Dear Readers, while all eyes turn to Lord Anthony Bridgerton’s quest to find a Viscountess, we bid adieu to Regé-Jean Page, who so triumphantly played the Duke of Hastings.”

The note however, acknowledged that the Duke will still always be a part of the Bridgerton family, adding that his wife Daphne, the Duchess of Hastings, played by Phoebe Dynevor,

“will remain a devoted wife and sister, helping her brother navigate the upcoming social season and what it has to offer – more intrigue and romance than my readers may be able to bear.”

Page responded to the note on Twitter, saying “Pleasure and a privilege! An honour to be a member of the family — on and off screen, cast, crew and incredible fans — the love is real and will just keep growing. 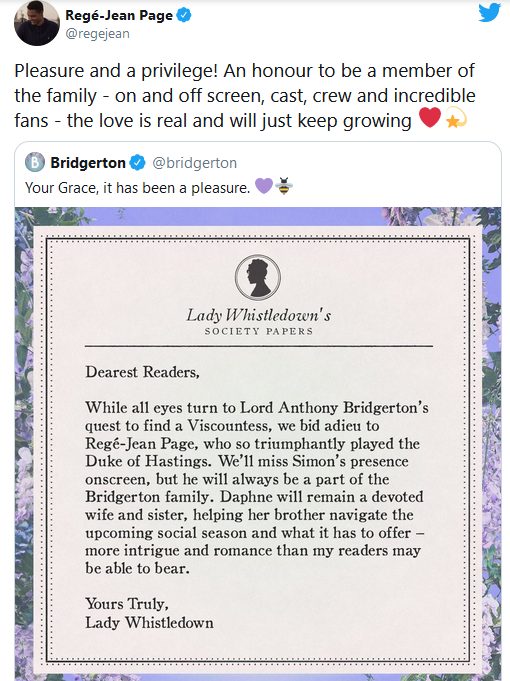 In other report, the new Netflix feature bids farewell to the common password sharing style popular among friends and family.

There’s some bad news for people who share Netflix passwords as the streaming platform has begun testing an account security feature that cuts off non-registered users.

According to reports, some users have received a notification asking them to confirm they live with the account owner by entering a code included in a text message or email sent to the subscriber.

“If you don’t live with the owner of this account, you need your own account to keep watching,” the message states.

So far, viewers have been given the option to delay verification and keep watching Netflix.

“This test is designed to help ensure that people using Netflix accounts are authorised to do so,” a spokesperson for Netflix said.

Netflix has previously said it was comfortable with users sharing their passwords, with Reed Hastings, the company’s co-founder and co-chief executive, saying there were “no plans” to crack down on the practice.

“Password sharing is something you have to learn to live with because there’s so much legitimate password sharing, like you sharing with your spouse, with your kids,” he said, speaking in 2016. “So there’s no bright line, and we’re doing fine as is.”

Interestingly, the common practice of sharing passwords violates the Netflix terms and condition which prohibits shared usage of accounts with individuals beyond a subscriber’s household.

“The Netflix service and any content viewed through the service are for your personal and non-commercial use only and may not be shared with individuals beyond your household,” the T&C reads.

Users who have received the new notification also get the option to delay verification but it appears that might only be temporal.