Legendary American singer, Beyoncé Knowles-Carter, and her man, Jay-Z, are the stars of a current Tiffany & Company advertising campaign. 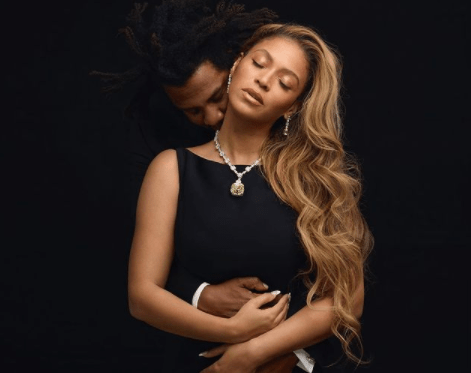 Beyoncé performs “Moon River” in a new Tiffany video, the song Audrey Hepburn famously sung in 1961’s Breakfast at Tiffany’s. Take a look at the commercial below:

The musicians appear in one advertisement in front of a previously unseen Jean-Michel Baquiat painting titled Equals Pi. Friends of Basquiat have objected to the painting’s use, while Tiffany representatives defended the ad, saying, “The beauty of art is that it can be interpreted in a variety of ways.”

All significant works elicit thought and stimulate discussion. Equals Pi by Jean-Michel Basquiat is no exception, and we are delighted to be able to share it with the rest of the world.”