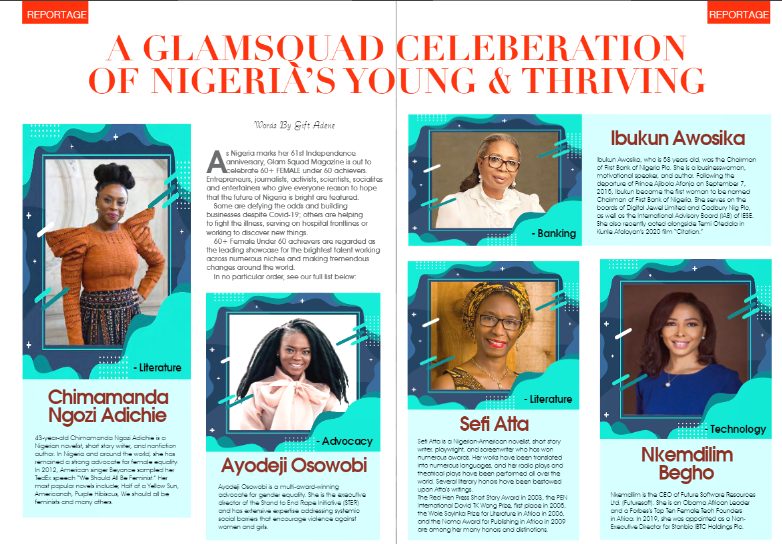 As Nigeria marks her 61st Independence anniversary, Glam Squad Magazine is out to celebrate 60+ FEMALE under 60 achievers. Entrepreneurs, journalists, activists, scientists, socialites and entertainers who give everyone reason to hope that the future of Nigeria is bright are featured.
Some are defying the odds and building businesses despite Covid-19; others are helping to fight the illness, serving on hospital frontlines or working to discover new things.
60+ Female Under 60 achievers are regarded as the leading showcase for the brightest talent working across numerous niches and making tremendous changes around the world.
In no particular order, see our full list below:

1. Chimamanda Ngozi Adichie – Literature
43-year-old Chimamanda Ngozi Adichie is a Nigerian novelist, short story writer, and nonfiction author. In Nigeria and around the world, she has remained a strong advocate for female equality. In 2012, American singer Beyonce sampled her TedEx speech “We Should All Be Feminist.”; Her most popular novels include; Half of a Yellow Sun, Americanah, Purple Hibiscus, We should all be feminists and many others.
2. Yemisi Edun – Banking
Born in the late 1960s, Yemisi Edun was appointed as the acting managing director for the First City Monument Bank, FCMB in early 2021. Yemisi was the bank&#39;s immediate past Chief Financial Officer, a position she held after working for the bank in various roles since joining in 2000.
3. Ibukun Awosika – Banking
Ibukun Awosika, who is 58 years old, was the Chairman of First Bank of Nigeria Plc. She is a businesswoman, motivational speaker, and author. Following the departure of Prince Ajibola Afonja on September 7, 2015, Ibukun became the first woman to be named Chairman of First Bank of Nigeria. She serves on the boards of Digital Jewel Limited and Cadbury Nig Plc, as well as the International Advisory Board (IAB) of IESE. She also recently acted alongside Temi Otedola in Kunle Afolayan’s 2020 film “Citation.”

A Glamsquad Celebration Of Nigeria’s Young And Thriving