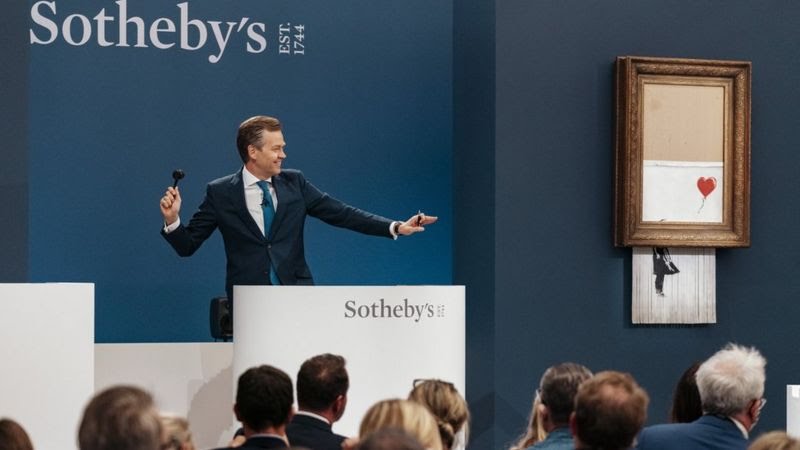 A Banksy art work which cut up at a former auction has sold for a whooping sum of £16 million.

Meanwhile, Love is in the Bin was what left of the unique artist’s live destruction of his piece Girl with Balloon, which cost £1m in 2018.

However, it went under the hammer at Sotheby’s in London on Thursday, going for £16m – immensely over its £4-6m, the approximate amount the owner hopes to achieve.

In addition to the buyer’s premium, the buyer paid £18.5m in total.

The transaction, which saw nine contenders struggle for around 10 minutes, outsmart the former record of £16.8m set for Banksy in the month of March.

Shortly after closing bidding auctioneer Oliver Barker joked he was pleased that the artwork was “still there”.

‘An accurate symbol’
Before setting the pace for the bidding, Mr Barker revealed that the painting turned to an “unexpected piece of performance art” when it cut up in the same auction room after being auction to a “private European investor” three years back.

Inception bids at £2.5m, its price tag reach £10m within minutes as many offers were placed.

Auction then steadily rise to a record £15m as the race progressively brought down between fewer bidders.

However, there were a fewer fewer moments after bidder Nick Buckley Wood, replacing a private investor, waited to see if anyone would pass his client’s £16m offer.

Meanwhile, a shake of the head from his competitor finally showcased they were out of the competition.