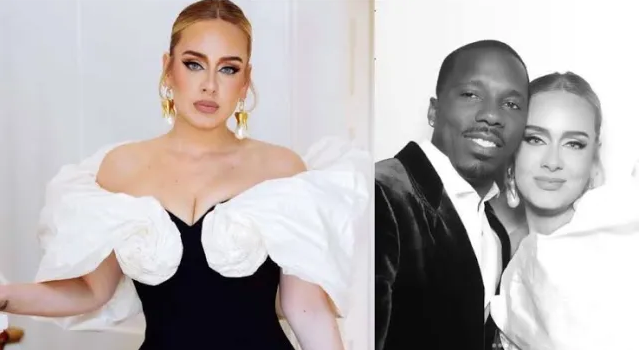 Adele has stated that she misses being married and would ‘absolutely’ consider doing it again.

The singer, 33, is dating sports agent Rich Paul, 39, and made the remark after being photographed with a ring on her wedding finger.

‘I’m totally open to marriage again,’ she remarked during an appearance on Sirius XM. Being married gave me the safest feeling I’d ever experienced in my life.’

‘Sadly, it didn’t work out, but I miss being married,’ the vocal powerhouse said of her split with ex Simon Konecki, 47, with whom she shares son Angelo, nine.

Her recent chart-topping record, 30, struck ‘the ideal tone of a relationship falling apart,’ she claimed.

The Hello songstress revealed: ‘Before it would be you f***ing this or you f***ing that. I am in my 30s now and that gets me nowhere.’

‘It’s about you having to sit down as two absolute grown-ups having to talk about how you are going to split your lives apart. It has to be respectful of each other and calm or nothing will get sorted out.

‘It’s not bitter, argumentative or f*** you and all that. It cannot be like that there is a child involved. There has been all sort of rumours online about why he got all my money.

She is highly cautious of her money, since she has a stated net worth of $190 million. ‘As if I’m stupid for letting someone have all my money?’ she asked.

Read Also: Fela misses out on 2021 Rock and Roll Hall of Fame

It’s not like he’d ask for it. Many people assumed I would be an enraged divorced lady. ‘Well, I’m not one of them — hear me out.’

Following her return to the UK for the much-anticipated ITV comeback event, Adele was seen wearing a band on her wedding finger as she exited the London Palladium last month.

0
Richards Michael December 6, 2021
No Comments Yet