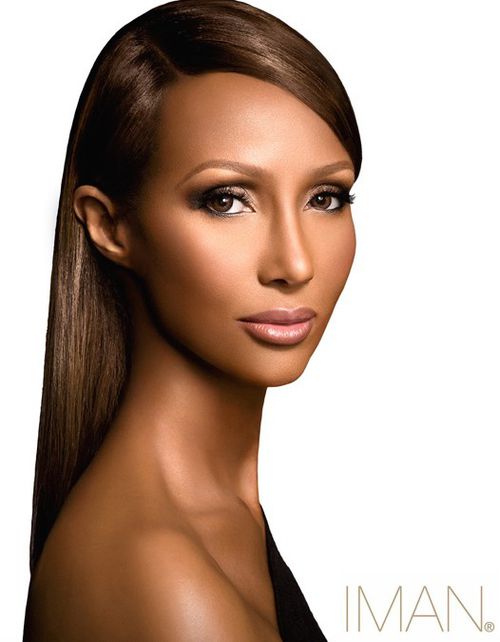 Here’s a look back at her career through the years and five things you didn’t know about the African beautiful entrepreneur.

#1. The supermodel, though born in Mogadishu, has very strong roots to the Arab world. She lived in both Saudi Arabia and Egypt during her youth, after the political instability in Somalia caused her family to move. “I’m Muslim and Egypt was a very progressive place. Girls like me could go to school. I completely fell in love with the people and the cultural legacy that goes far beyond the pyramids.” During her four-years in the North African country, Iman discovered Egyptian icons Umm Kulthum and Faten Hamama who both greatly influenced her modeling career. “When I started modeling, I never forgot how Umm Kulthum used to carry herself. From her, I learned the drama and the absolute stillness when you are on the runway and how to command with grace and dignity, but without having to be too much,” she says.

#2. She was very hesitant to have her picture taken by Peter Beard when the photographer initially approached her. “During my first year in Nairobi, a man stopped me in the street and asked if I had ever been photographed. I thought he was trying to pick me up, so I ignored him, but he insisted. To get rid of him, I said, ‘Yes, of course I have.’ In my mind I was thinking, what do these people think – that I have never seen a camera?” she recalls. She allowed him to photograph her only if he could pay off her college tuition. She went on to pose for some of the most iconic photographers of our time, including Richard Avedon, Irving Penn, and Helmut Newton to name a few.

#3. When she first started modeling, she pretended that she couldn’t speak or understand any English as a way to find out what people really thought about her. “This experience taught me a lot about the US. People described me as if I were not human, like if I was coming from another world. They said I was exotic… A parrot is exotic, I’m a person,” she said to Vogue Arabia. In fact, Iman was one of the only black models at the time, and remembers being paid a lesser wage than her colleagues for doing the same exact work. “As my career progressed, I became the first black model to refuse to work for a lower wage than other girls. To me, I was providing the same service, so I had to be paid equally,” she reveals.

#4. Due to her conservative upbringing, she would hide her nude portraits photographed by Richard Avedon when her parents would come to visit her. “Combining my work with my religion was one of the most difficult things. It is complicated to be photographed in a provocative way, even if the pictures are artful. I shot stunning nudes with Richard Avedon, one of the most iconic photographers ever, and although I was proud of these images, when my parents would come to visit me, I would hide them under the bed,” she recalls. “There was no way I could explain to my father that that was art. In fact, I never reconciled posing nude with my religion and family. I always say, may Allah have mercy on my soul if I have not done it right.”

#5. Iman Cosmetics was launched when the supermodel was on set for a US Vogue shoot and the makeup artist didn’t have any foundation for black skin tones. “When you work in the industry, your looks are your currency. If you don’t have a good appearance, you won’t be booked again – and no one will blame the beauty team or the photographer. This made me start experimenting with makeup from an early stage. I would buy any foundation with pigment so I could mix and match,” she reveals. The all-inclusive cosmetics range was launched in 1994, and features difficult-to-find shades suited for brown and black skin tones. Today, she is still involved with all of the product launches, and even sometimes manages the brand’s social media.

Genevieve Nnaji Receives Backlash For Her Views on Feminism