For autumn/winter 2021, Nicolas Ghesquière paid a visit to Ancient Greece in a Louis Vuitton collection that transcended time and space, and debuted a new collaboration with Fornasetti.

These are the five things to know about the collection.

The collection was founded in Ancient Greece

If there was ever a time for a grandiose metaphor, surely now is it. At the cusp of our return to “normality”, Nicolas Ghesquière steered his ever-fuelled time machine back to Ancient Greece, mirroring our time of change in that long-lost world – upon which a new one was built. You could see his Louis Vuitton collection as a deep breath of encouragement before our hopeful re-emergence this autumn: an empowering post-lockdown wardrobe founded in experiences to embolden our task at hand. “I’m interested in time clashes, and it’s interesting to look at the foundation of our civilisation: what made us. It’s a very ambitious reflection,” the designer said on a video call from Paris. “It’s something I’ve wanted to explore for a long time, and also something quite ambitious. I think now is the moment to take on an odyssey like that.” 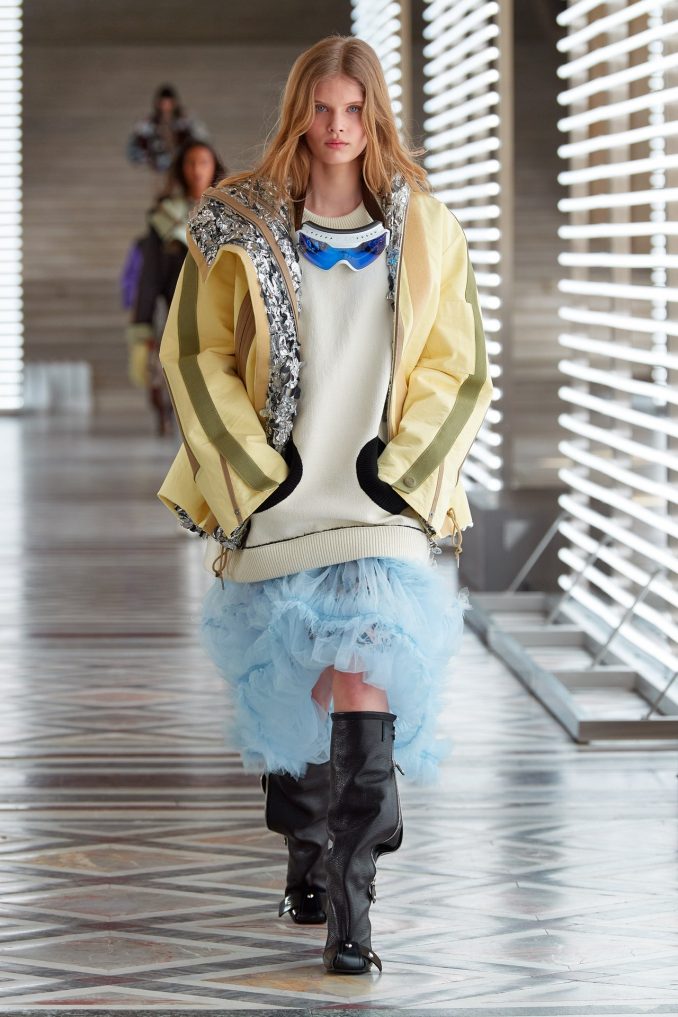 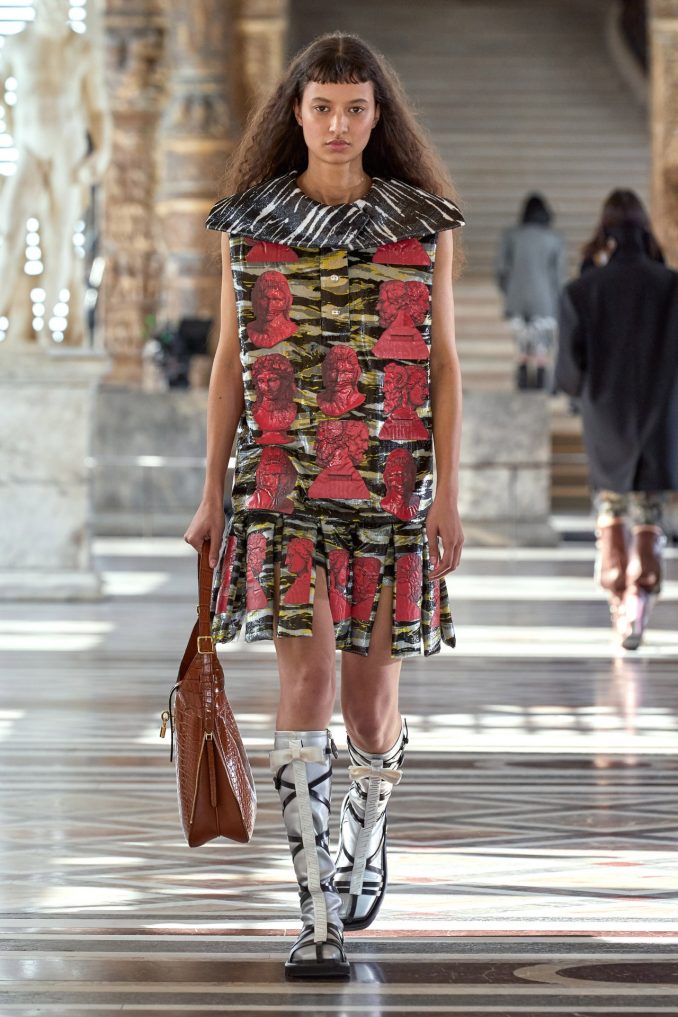 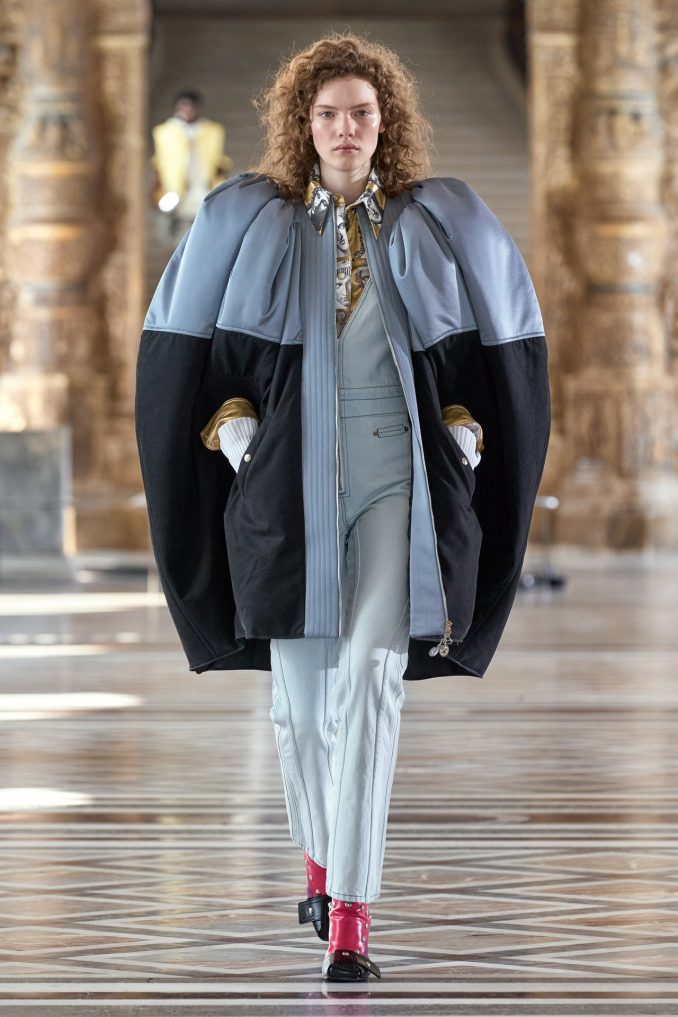 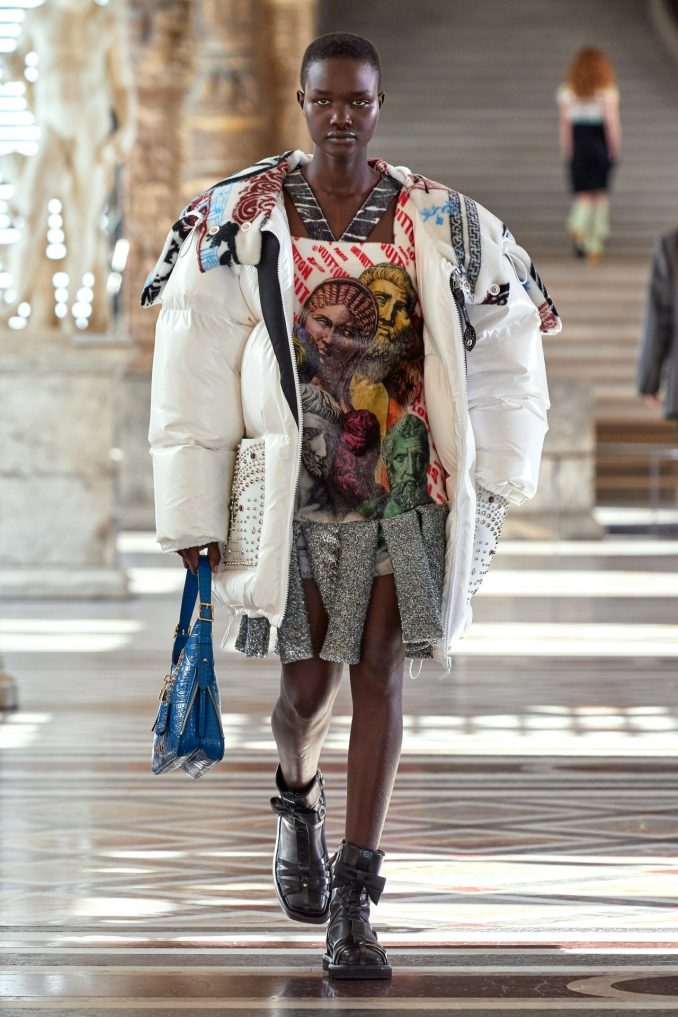 The show was filmed in the Louvre

Framed by the Michelangelo and Daru Galleries in the Louvre, Ghesquière’s creations collaged and contemporised the trademarks of the Golden Age in figurative ruins-to-riches gestures tailored to a new era. “The galleries are too small for the size of a normal show [with an audience], and since they will also be under restoration for the next two years, I took it as a sign,” he said. He layered his collection with memories from Ancient Greece in the silhouettes of togas translated into magnified sportswear and sandals that morphed into sci-fi boots; then, he imbued his vision with traces from other times of illumination in a constant conversation between eras and evolutions, from Renaissance breeches that became orbed structures under long tops, to layer cake skirts and latticed bodices that could have come from the Enlightenment, and a consistent overtone of his own formative ’80s.

A few weeks ago, Ghesquière had been watching in awe as NASA’s Perseverance Rover landed on Mars. Not long after, archaeologists excavated a 2,000-year-old Roman chariot in Pompeii. To a mind like his – forever suspended between time and space – it said something about how time connects us. “For me, that was two very fascinating pieces of news. We have no idea what Mars is, but we know it so well from comics and science fiction. It’s kind of crazy, the capacity of our imagination,” he reflected, drawing a parallel to the chariot discovery. “This amazing thing says so much about who we are today. It’s preparing for what’s coming.” In a season of uncertainty that’s divided designers into dreamers and pragmatists, Ghesquière’s escapism was more than a fantasy. It was rooted in reality.

The collection debuted a collaboration with Fornasetti

In a new collaboration with the estate of Piero Fornasetti – whose archives are already a rich source of motifs on merchandise – Ghesquière adorned his collection with the late artist’s imagery, itself partly derived from the iconography of Ancient Greece. “Fornasetti is a partnership I’ve wanted to make for a long time. I’m very intrigued by the world: the very beautiful drawings of divinity and representations of women,” the designer said, adding that Fornasetti’s graphic quality was ideal for a season when fashion has to jump through a computer screen. “Since the distance is there, I wanted to have something people would catch from home; a great moment of fashion.” Worked onto – and into – garments through elaborate techniques, the many faces of Fornasetti’s imagery added more layers to Ghesquière’s time-travelling photo album, intensifying the idea of memories from other eras and worlds. The bags will sell out in seconds.