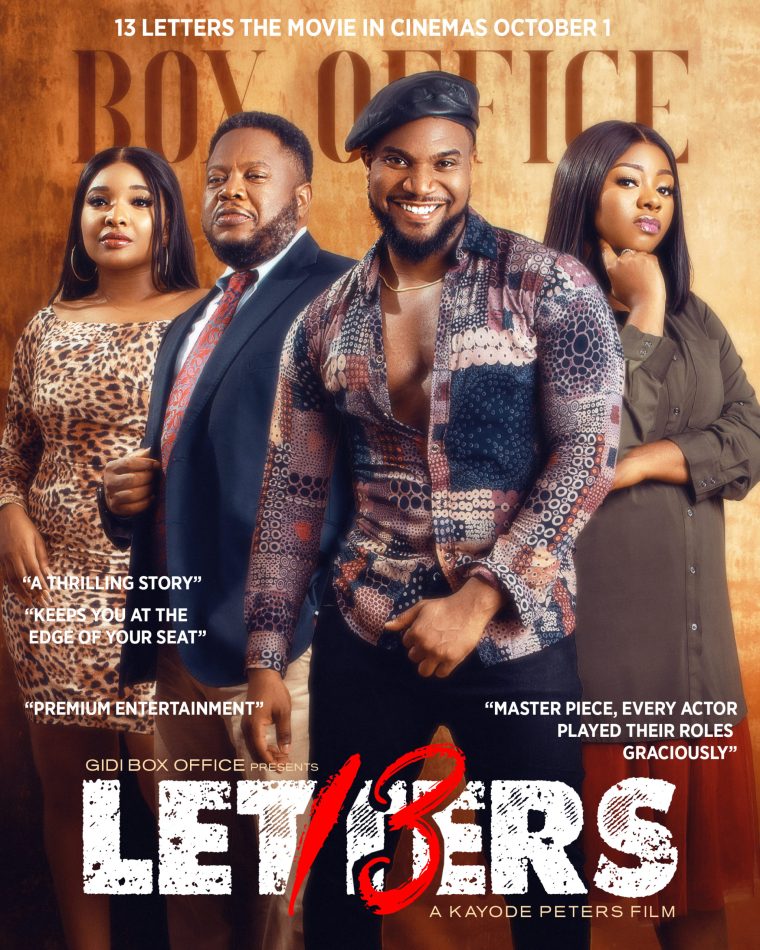 13 Letters depicts the narrative of Akinola ‘Owoblow’ Owolabi, a heartbroken, disappointed boy who grows up to become a playboy and leaves a trail of broken hearts all over Lagos.

His exes become enraged and go to social media to vent their displeasure, forcing him to employ a Public Relations (PR) specialist who forces him to confront the truth about himself.

Read Also: Movie Review: Charge and Bail is a banger!

The romance drama begins with a compelling backstory for the central character, Kunle Remi. We learn about his beginnings and why he chooses to never fall in love.

The film, which was written by Pearl Agwu and directed and produced by Kayode Peters, is full of the standard player stereotypes: money, good looks, a foolproof method for getting any girl out of his life, and best buddies who try to offer solid advise while secretly envious of the lead.

13 Letters falls off the tracks after the dramatic opening moments, with clumsily executed dialogues, tacky dye jobs, phony accents, and absolutely terrible acting. Some of the cast may be responsible for the latter.

Apart from the main, Mofe Duncan, Bimbo Ademoye, Bolanle Ninalowo, and Chris Iheuwa, some of the major characters in the film have little to no acting experience, which shows.

Adedamola Adewole (Adeherself), who plays Owoblow’s younger sister, may be seen repeating her lines. Teddy A, who plays one of the primary character’s best pals on BBNaija, has struggled with his performances.

The exes are depicted as conflicted women who are angry with Owoblow but also jealous of each other and still have feelings for the man they are supposed to despise.

It’s difficult to get through 13 Letters until Bimbo Ademoye appears as the public relations expert attempting to preserve the lead’s reputation.

Read Also: Movie Review: ‘Bad Comments’ is not that bad

In a scene reminiscent of Hitchcock films, the playboy meets his match in Bimbo’s character, the ‘One,’ who refuses to succumb to his charms. When confronted with opposition, Owoblow shows some character development for the first time.

Bimbo, like Ayinla, steals your attention in her scenes, so you don’t notice the twist until it’s right in front of you.

In typical Nollywood manner, the film seeks to convey an important message about people’s callous treatment of others until they are confronted with a similar predicament.

Read Also: Ladies, Here Are 3 Types Of Men You Should Avoid

Movie Reviw: Is ‘Malignant’ worth your time and money?